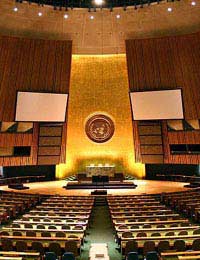 Many countries have their own laws to protect human rights. However, not all countries have such laws and those who do sometimes fail to follow them. Enforcing human rights law internationally can be problematic – different cultures may have different standards and may be unwilling to change their behaviour to satisfy internationally accepted norms.

In today’s world ensuring human rights may have to be balanced against the need or desire to maintain trade or diplomatic relations with a country whose human rights record is questionable. The waters have been further muddied by the so-called war on terror. When countries, which might previously have been setting the standard for international human rights, have subverted those rights it may make it more difficult to enforce human rights in other countries.

The starting point of much international human rights law is the Universal Declaration of Human Rights adopted by the General Assembly of the United Nations (UN) in 1948. This document sets out the fundamental rights and freedoms considered by the UN to be universal to all people. Although it is not in itself a legally binding document it has been accepted as a template for human rights by many countries throughout the world.

How The United Nations Deals with Complaints about Human Rights

The Human Rights Council was set up by the UN in 2006 to promote and protect human rights and is made up of 47 inter-governmental representatives from around the world. Part of its current remit is to assess the human rights situation in all 192 member states of the UN. The UN has a complaints procedure in place through which organisations or individuals can alert the UN to human rights breaches. This is aimed at resolving persistent, serious and reliably documented breaches of human rights. A screening process is in place to filter out malicious or politically-motivated complaints.

Over the years the UN has introduced a number of conventions and protocols relating to all areas of human rights. Through specialist commissions, advisers, working groups and Special Rapporteurs based all over the world the UN seeks to protect and promote human rights. Whilst maintaining sensitivity to cultural differences, the UN must uphold a basic, universal standard for human rights.

The UN’s Security Council can deploy UN peacekeeping forces to countries where human rights violations are said to be taking place. This may happen at the request of the country itself or following a resolution, due to a failure by the country to resolve the problems or because of a breakdown in the rule of law in that country. The UN’s primary objective is to avoid war and keep the peace – therefore deploying forces of any kind will always be a last resort.