Home > The Law Explained > A UK Bill of Rights? 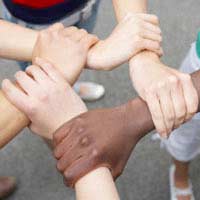 In the last 10 years a number of changes have been made to the laws of the UK in response to the perceived increase in the threat to national security. This has led to growing concerns about the apparent infringement of the many rights and freedoms considered to be fundamental to the UK’s constitution. Compliance with the laws set out in the Human Rights Act – based on the European Convention on Human Rights – is largely unavoidable. However, not all British fundamental rights are included in the Act. For example, the right to a trial by jury is not included in the Human Rights Act and consequently new legislation has overturned that right in some circumstances.

Some have argued that a written constitution, or bill of rights, would make it much harder for new laws to take away our fundamental human rights.

Different Views about a British Bill of Rights

Those who support the idea of a British Bill of Rights represent the full range of political views and their reasons for supporting a written constitution may differ. Some may see it as escaping the bonds of a legal framework imposed by the European Union. Others see it as a way of creating a stronger but more relevant legal framework.

All three of the UK’s main political parties have their own ideas about introducing a single piece of legislation to encode the rights of UK citizens. The Labour Party has drawn up a Green Paper and invited comments on a proposed Bill of Rights. The Liberal Democrats have drawn up a Freedom Bill to correct or repeal earlier laws which it believes have taken away fundamental rights. The Conservative Party has suggested replacing the Human Rights Act with a British Bill of Rights.

A New Bill of Rights....and Responsibilities

A potential new bill of rights is currently being considered by the government. This consultation process recognises that the UK has been going through a time of economic and social upheaval, and that it is at times of upheaval when people most need reassurance that their rights and freedoms will be protected. Crucially, the proposed legislation would not only set out the basic rights of all people in the UK, it would also set out the reciprocal responsibilities expected of the people.

The government recognises that human rights, for example as set out in the Human Rights Act, cannot be made conditional upon people observing certain legal responsibilities. However, they state that a greater emphasis on an individual’s responsibilities – and a clear statement of what those responsibilities are – is fundamental in a fair and civilised society. The proposal is not necessarily to create a binding piece of legislation. It could simply amount to a declaration of those rights and responsibilities which are considered to be inherent to the UK.

Does the UK Need a Bill of Rights

Many of the laws which set out our human rights may be amended or repealed. As the law stands, it can be very difficult to get a clear view of what our fundamental rights are. Perhaps, almost as importantly, without a written constitution it may be difficult for citizens and residents to see why these are the UK’s fundamental rights – rather than simply laws imposed on the UK by the European Union. Some proponents of a British Bill of Rights argue that it could help people take pride in the many rights and civil liberties which were recognised in the UK, long before they were set down in European law.

Countries throughout the world have found a written constitution or bill of rights to be invaluable in strengthening and galvanizing a sense of national identity. A country’s bill of rights can go beyond the idea of the universal human rights common to all people, to consider those rights and values which define a country and unite its citizens. For example, social and economic rights such as healthcare and welfare could be included in the UK’s Bill of Rights.

At a time when many communities feel divided and disenfranchised a Bill of Rights could be a unifying force for the UK. A written constitution could remind all British citizens what they have in common – and what they have to be proud of.

Freedom from Slavery or Forced Labour
Share Your Story, Join the Discussion or Seek Advice..
Most people are not aware that Britain does have a written constitution. The constitution was wrote in 1215 and was presented to King John at Runnymeed. The magna carta is mother of all laws and statute acts and keeps in place Britain's, what I could say - hidden constitution. The magna carta clearly demonstrates time and time again (the ten commandments) and the duty of all monarchs to uphold the church of England, the freedom and liberties of this land. it is of-course the responsibility of all peoples to learn of the magna carta and its powers and to realise how the law has been broken more than a thousand times by the elites and how all parliament statutes have been illegal since 1911 due to the parliament act that dissolved the royal prerogative. A parliament in a kingdom cannot work without the monarchs consent because the monarchy made an agreement with common man to uphold the laws of these lands. Let us note as - well that a monarchs oath is sworn at the coronation. Read it up (Elizebeth two coronation oath) and they must protect the liberties, freedoms and laws of these lands and if they don't the five barons of the said 20 can form a peer and petition the monarch to respond to the demands of the people and if no response is given within of 40 days then further action can be taken by seizing lands, castles or any crown properties until further resolve. Article 61, magna carta 1215.
AntonRHood - 26-Feb-17 @ 5:14 PM
I believe that making the people of the United Kingdom sovereign with a UK constitution would be a great start for the rights of our people. At present my family have been banging our heads against walls with regards to the legal system in this country. Since there are so many acts of parliament now, which have had the secrets act included; namely The Town & Country Planning Act 1997-98. Here when you need a solicitor to act on your behalf and give paid advice.... Well takes you aback to find that the solicitor has signed the Secrets Act in third year of university. Where is the RIGHT in that eh? I am also in the process of finding out how many other undergraduates have to sign the Secrets Act. This is our sovereign government taking rights from the people by the back door. Yet we the people pay for it.
Haggis - 20-Nov-15 @ 12:27 AM
So pleased to see your website! 100% agree that the UK should write its own constitution. It should be written in plain English so that all people can understand their rights by law. Having a British constitution could help unify and give pride, individuality and privacy back to the British citizens!
Alice - 26-Mar-11 @ 11:58 AM
Title:
(never shown)
Firstname:
(never shown)
Surname:
(never shown)
Email:
(never shown)
Nickname:
(shown)
Comment:
Validate: