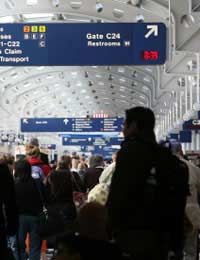 Since the 9/11 terrorist attacks stricter and stricter security measures have been introduced at airports all over the world. From restrictions on the number of bags that may be taken on board the airplane, to the ban on fluids being carried through airport security, the new security measures can be annoying and inconvenient. It could be argued that some of the new airport security measures are not only annoying but also come close to infringing on an individual’s rights and freedoms. Further, if rights are being infringed, it may raise the question of whether protecting the safety of a country and its people supersedes an individual’s human rights.

The debate on security versus individual freedom rages on in relation to many new rules and laws. In March 2010 a UK parliamentary committee called for a review of all laws introduced since September 2001. A large part of the population chooses to use airports on a regular basis and for some people air travel is almost unavoidable. Most people agree that heightened security at airports can only be beneficial. However, it may not always be compatible with our human rights.

The latest innovation in airport security is the full body scanner. These were first introduced at UK airports, Heathrow and Manchester, in early 2010. Implementation of the body scanners was brought forward after an apparent attempt, on 25 December 2009, to blow up an airplane flying to Detroit, in the USA. People passing through security may be randomly chosen to go through the body scanners or passengers deemed to be behaving suspiciously could be selected for scanning. Refusal to be scanned means that a passenger will not be allowed to board their flight.

An individual selected to go through the body scanner stands in a special booth in which they are bombarded with electromagnetic rays. This generates a 3-D image of the individual. The scanners produce a virtual “naked” image, allowing security staff to identify any weapons or dangerous objects secreted under clothing. A code of conduct has been implemented for the use of scanners to protect the privacy of the travellers asked to go through them. This includes the requirements that the body scanner image is destroyed immediately and that the security officer monitoring the images must not be able to see the person being scanned.

Even before the body scanners were introduced, numerous concerns about their use and their impact on an individual’s rights had been voiced. In addition to fears that the body scanners contravene privacy laws, some have suggested that the scanners could breach child pornography laws - by producing naked images of children.

Within weeks of the scanners being introduced at UK airports, the UK Equality and Human Rights Commission said that they may be unlawful – breaching both the right to privacy and equality laws. The Commission recognises that the right to life is of paramount importance and that security measures are vital in that respect. However, it raised concerns about the criteria used to select people to go through the body scanners and the safeguards put into place to regulate their use, and to protect the rights and dignity of passengers.

Proponents of passenger profiling argue that, by concentrating on individuals who are more likely to pose a threat, security will be faster and more efficient – to the benefit of the innocent passenger. Those who are opposed to passenger profiling say that it is hugely discriminatory – that it breaches the rights of the vast, innocent, majority of those from the religious or ethnic groups most likely to be targeted. It has also been reasoned that, if passenger profiling is introduced, terrorists will simply change their methods to avoid being caught by it.

An individual’s right to privacy has to sit alongside a country’s right – and duty – to protect its borders and its citizens. These two rights may sometimes be in direct opposition to each other. Some people believe that an individual’s rights will always take second place to the security and safety of the majority. The question is to what extent can protecting the security of a nation justify compromising the rights of the individual? In the current global climate this debate is likely to continue for the foreseeable future.

Equal Rights: The Right to be Treated Equally
Share Your Story, Join the Discussion or Seek Advice..
I was recently requested for an additional handluggage search at Bristol Airport. The male operator opened my bag and pulled it's contents including underwear and prescribed medication out in full public view. I am a 60 yr old male. I wasn't embarrassed and had no objection to security screening. I was however concerned because I wasn't affected many people, especially women may have felt embarrassed at this process being carried out in such public view with no offer of privacy. I wrote to the airport stating my concerns and suggesting rooms or screens for these searches if required. The first response from the airport was inaccurate in that they stated there were signs offering private rooms for searches and that the security operator would have advised me of the availability of such. This was not true. I then asked for a response from an airport manager. The response was a fob off. They did not appear to understand the basics of privacy or respect for people. They have not even stated that staff training will be reviewed. Is this worth pursuing for the public good or do you think I am wasting my time?
None - 14-Jan-20 @ 7:27 PM
Which rights do you have at the AirPort og the airpolice Ask for more control of your passport? Are you entitled to know why? My daughters boyfriend was asked about delivering his UK passport in Firenze AirPort in Italy for a more spesific controll when we were standing in the securityline (before we had passed the machines). Theygave him the passport back after a few minutes. When he was waiting for the plane, the same officer returned again and asked for another controll for the passport. The officer wanted him to follow him to another rom but the guy refused. Several police officiers arrived and where standing there when the officier went to check the passport. At the end they just said it was something wrong with the chip but they let him go. Are there any procedure to follow to ensure the situation from escalating and showing the police officiers that they have to follow the law. We felt they were just playing and that it was a discriminatory act. He was the only black person as far as I could see.....and the police acted vaguely.
BK - 2-Aug-19 @ 12:33 PM
My daughter was adopted she now 22 years old how can I get the word out that I am looking for her p
Lassie - 23-Dec-16 @ 1:39 PM
Title:
(never shown)
Firstname:
(never shown)
Surname:
(never shown)
Email:
(never shown)
Nickname:
(shown)
Comment:
Validate: