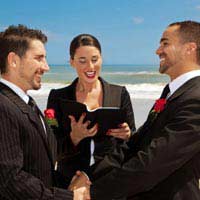 Several of the Articles contained in the European Convention on Human Rights may be applicable to same sex marriages. These include:

All of these rights were incorporated into UK law when the Human Rights Act came into force.

Amongst the rights enjoyed by the parties to a civil partnership are:

Parties to a civil partnership also acquire similar rights, and responsibilities, in respect of any children of the partnership or of either partner.

Is a Civil Partnership the Same as a Marriage?

But Doesn’t the Civil Partnership Act Discriminate Against Heterosexual Couples?

In June 2010 the European Court of Human Rights heard a case concerning the right to same-sex marriages. The case was brought by two Austrians who said that their human rights had been breached when they were refused a marriage licence in 2002.